As you can probably tell by now, I'm a huge Shakespeare fan. I'm trying, on occasion, to mention other authors, since surely there's another author or two out there. But right now, I'm reading Stephen Greenblatt's biography of Shakespeare, Will in the World, so I'm a bit focused on the Bard of Avon.

So, in my digging, I ran across these amazing videos of High School Students performing Shakespeare. Wow, are they good. The first kid is as good as any Shakespearean Actor I've ever seen. Take a few minutes to check out his and some of the other 16,000 entries at the Shakespeare Competition Website.

Link.
at 2:07 PM No comments:
Email ThisBlogThis!Share to TwitterShare to FacebookShare to Pinterest 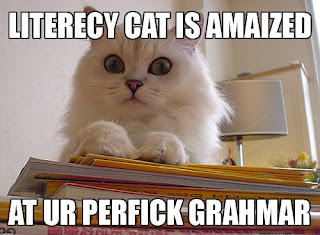 Okay, so you may not be familiar with the internet meme du'jour called LOLcats (my favorite one is posted to the left), but this article should be amusing to anyone interested in the way language changes, especially in how rapidly it changes with the internet and text messages.

Lolcats are amusing images of animals, primarily cats, with text on them in the vein of the old "hang in there" posters, used primarily sarcastically in online message boards -- some are cute, some are funny, and some are vulgar.

In these images, cats have their own kind of pidgin English (Don't be laughin I are learnin to waltz.) which they speak which people have noted has a -- some are cute, some are funny, and some are vulgar. In the last few (weeks/months?) the movement of creating new ones has grown at an amazing rate. This article analyzes their growth from a linguistic perspective -- you'll get a kick out of it.


Link.
at 1:17 PM No comments:
Email ThisBlogThis!Share to TwitterShare to FacebookShare to Pinterest

Last year we submitted some posters to Edutopia, the George Lucas Educational Foundation magazine, for review, and didn't hear back from them.

We sent them a copy of both our Language of Politicians and AEP award winning Language of Advertising posters.

Well, it looks like they liked them. They were given a brief review in October's issue.

Both poster sets are designed to prepare your students to listen & read with a critical eye and ear what advertisers and politicians are saying. They're a great introduction to rhetorical devices, and as the election frenzy gets underway, it's a great opportunity to get students thinking about the use of language.
at 11:24 AM No comments:
Labels: posters, product review, rhetoric
Email ThisBlogThis!Share to TwitterShare to FacebookShare to Pinterest

Thanks National Curriculum Advisory Board! 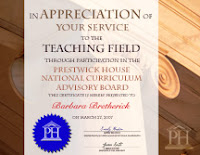 We'd like to extend our thanks to the two members of the 2006 National Curriculum Advisory Board, Barbara Bretherick and Catharine Routh.

Members of the Prestwick House National Curriculum Advisory board are chosen from an extensive list of dedicated teachers to help keep us up to date on the latest trends in the educational field.

Each member is given a stipend of $300 to pay for curriculum materials as well as sample copies of many new & in-development to review. On their own, these teachers give us valuable insight into what teachers are looking for in new products and what we can do to make our products more useful.

This year's advisory board was very helpful in getting many of our newest products, especially 3 Simple Truths and 6 Essential Traits of Powerful Writing, our New Poe Anthology, and Discovering Genre: Poetry off the ground and into classrooms.

Due to the success of the 2006/2007 program, we're extending the PHNCAB to 13 members this year. We're in the final stages of selection, and we'll announce all those who are chosen next week. If you'd like to be considered as a member of next year's PHNCAB, send me an E-mail at keith[at]prestwickhouse.com and we'll send you an application!

We're very proud to have a group of teachers helping us out who are so dedicated to their profession. Thanks!
at 1:15 PM No comments:
Labels: National Curriculum Advisory Board, Thanks
Email ThisBlogThis!Share to TwitterShare to FacebookShare to Pinterest

Book Review: The Life of Pi

Since Yann Martel's appearance at last year's NCTE conference, we've seen a big uptick in teacher interest in his book The Life of Pi, winner of the 2002 Man Booker Prize, though many teachers still aren't familiar with this fun story, and some with just a back-cover knowledge may have put it aside (or considered adding it) to their classroom, when it might be a good (or bad) choice.

Summary: Pi Patel is a young man growing up in a zoo in India. In the first third of the book (my favorite part) we find Pi wandering the streets of India getting to know many holy men, and becoming a devote of Christianity, Islam, and Hinduism. He gets himself in trouble because he doesn't feel that these religions are mutually exclusive, while everyone else tells him he must choose one faith and follow only that faith.

When Pi's family plans to move their zoo to Canada, they board a ship for the journey. Caught in a storm the ship goes down, and when the chaos ends, Pi finds himself aboard a life raft with an Orangutan, a hyeena, and a Bengal tiger. The bulk of the story involves young Pi's survival at sea on a life raft on a tarpaulin over the head of a 400 lb. Bengal tiger. His ingenuity and faith keeps him alive for 227 days as he fishes, not only for himself, but also for his tiger.

The story eventually gains a bit of a surrealistic quality, and I won't spoil the ending, but you'll be left wondering at the end what's real and what's imaginary.

While I'd recommend the book to many classrooms, and as far as I remember, there's little or no foul language, there is a bit of cannibalism that might come as a bit of a shock to some readers. The story, however, is told in a delightful way that will really interest most of your students, and there's really something in here for everyone.