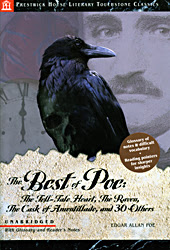 It's been a while, but here's a great story from Doug Grudzina, creator and author of many of our top-selling products such as 3 Simple Truths and 6 Essential Traits of Powerful Writing and Prestwick AP Teaching Units.


It was destined from the start to become an internecine battle of epic proportions. If people had fought for his friendship in his life the way they’re fighting for his remains, he might have lived a vastly different life and had a vastly different career. But, then again, he might have had a vastly different impact on American literature. Still, the brouhaha that has erupted between Philadelphia, PA and Baltimore, MD over which city should hold the distinction of Edgar Allan Poe’s burial place is a conflict unrivaled since that last war between the North and the South.

On Thursday, October 4, Philadelphia writer, reviewer and blogger Edward Pettit threw down the gauntlet. Philadelphia, he claimed in an article in the Philadelphia City Paper— and not Baltimore—should be the final resting place of Edgar Allan Poe:

Philadelphia’s claim to burial rights, according to Pettit is that it was “while living in Philadelphia [that] Poe wrote the bulk of his greatest work.”

“Other cities...be warned,” he contends. “Acolytes of Poe will be flocking to Philadelphia [in 2009to celebrate the two hundredth anniversary of the writer’s birth] to celebrate our Edgar.” Poe did, after all, live and write in Boston, New York, Philadelphia, Baltimore, and Richmond. He spent time in West Point and London as well. The man got around.

Still, it was in Baltimore that he died and was buried. Mystery writer—and proud Baltimorean—Laura Lippman immediately joined the fray:

“Possession is nine-tenths of the law, and this fact is indisputable: We have the body,” she retorts in her City Paper rejoinder. “While it's true that the work he produced in Baltimore is not particularly distinctive,” she parries Pettit’s bulk-of-his-greatest-work thrust, “it was in Baltimore that Poe won a literary contest that was pivotal to his sense of himself as a real writer.”

She continues, “What have you done for Poe lately, Philadelphia? We named our football team the Ravens ... We have a Poe room in our Central Library. We even have a housing project called the Poe Homes ... And it is here, every Jan. 19, that the Poe Toaster comes to pay his respects. Granted, the memorial to Poe gets his birthday wrong, but it was the 19th century, before Google made fact-checking so much easier.”

In case you don’t remember the story, Edgar Allan Poe (who in those days simply went by “Edgar Poe”—Eddie to his friends), was traveling from Richmond, Virginia, to either Philadelphia (where he had a business appointment) or New York (where he lived), when he was found in Baltimore on October 3, 1849. He was delirious, in obvious distress, and dressed in ragged clothing that was not his. He was taken to the Washington College Hospital, where he died early on the morning of October 7. He was never coherent long enough to explain why he was in Baltimore and how he came to be in such a predicament. The precise cause of Poe's death remains a mystery although there are numerous theories. His funeral—in Baltimore on October 8—lasted barely three minutes, and was attended by a mere seven people.

Poe was originally buried in his family’s plot in a neglected and overgrown back corner of the Westminster burying ground of the First Presbyterian Church in Baltimore. In 1875, he was exhumed and reburied under a huge marble monument closer to the front of the cemetery. The monument was paid for in part by donations from Baltimore’s school children and in part by a sizeable donation from a George W. Childs—of Philadelphia.

Once the battle lines were drawn, everyone, it seemed, wanted a piece of the action: and the issue escalated from turf war to outright cultural crusade. Baltimore Sun columnist Laura Vozzellaasserts that it is no wonder that “A city known for a bell that's broken and a delicacy that's Cheez Whiz-ed” would want to enhance its cultural reputation by stealing Edgar Allan Poe from Baltimore. Sparring against Pettit’s main point she writes, “It was here in Baltimore... where he wrote his first true horror story.”

Baltimore is also where Poe met his cousin and future wife Virginia Clemm. If Philadelphia is so desperate for a famous corpse, Vozella offers, they can have John Wilkes Booth.

Then things got really ugly. On Wednesday, October 10, Philly’s Daily Examiner blogger A.J. Daulerio responded to the Cheez-Whiz crack by calling Baltimoreans “crabcake-stuffed cranks.” City Paper managing editor Brian Hickey wrote of Baltimore’s “offer” to give Philly the body of Booth, “I’d expect nothing less from the syphilis capital of the universe.”

On Thursday (October 11), Boston blogger Jeremy Dibbell, who describes himself as a “bibliophile, haunter of used bookstores, and library science/history grad student at Simmons College” declined to enter Boston into the arena.

“We'll let Baltimore and Philly fight this one out,” he writes, “we wouldn't want to rile up the Brahmins.” Granted, he notes Poe was born in Boston and did sign his first published work Tamerlane and Other Poems, “By A Bostonian.” But Poe and his work were not well-received in Boston. Poe and the other Boston literati did not get along well, and Poe would eventually write that he was “ashamed” to have been born in Beantown. Dibbell quotes a January 28 story in the Boston Globe "His name is not routinely uttered on tours of the city, nor does it appear among the 1,000-plus attractions on the city's tourism website. Boston has neither a Poe statue nor a Poe museum—only a small plaque commemorating his birthplace on the outside wall of a luggage store.” Author Matthew Pearl, however, in an October 18 e-mail to Ed Pettit seems to hint at wanting to pick up the gauntlet on behalf of Boston. Pettit’s reply is a hearty bring it on.

Still Philly and Baltimore, both proud of their associations with the tortured poet, are at the forefront of the mêlée. On Sunday the 14th, Vozella defended her city against Hickey’s attack
insisting that Baltimore was only fourth on the list of syphilis capitals of the world.   “Philly didn't mind when Baltimore beat back the Brits in 1814,” she writes, “but we defend our most famous author and -- sheesh!”

Finally, on Monday, October 15, the Philadelphia Inquirer couldn’t resist piping in. Book critic Carlin Romano claims: “At one minute after midnight on Sunday—notably after deadline—a dark-haired figure in black cape and boots tossed two sheets of paper into The Inquirer's lobby, then fled. They contained only a poem, written in black ink, apparently in third person... ‘The War Over E.A.P.’ (With Apologies to My Darling, My Darling, Annabel Lee).” The text of the mysterious poem is here.

And that, given Pettit’s Bibliothecary entry of October 18, in which he welcomes Boston’s entry into the tussle, is the closest to an up-to-the-minute report on the Poe Wars we can offer. If you know of any more recent updates, let us know.

Meanwhile, there’s a LOT a teacher can do with his or her kids—research Poe’s life, read the works allegedly written during Poe’s stays in his myriad homes, and have an informed debate on who has the ultimate right to claim the poet’s remains. Maybe they’ll decide, as Pearl concludes in his e-mail to Pettit, “one of the extraordinary and potent things about Poe is that he doesn't belong to any one home, city, country. He's forever the orphan.”