Animal Farm: The CIA and the Communist Pigs 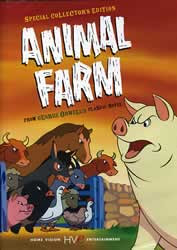 In light of the CIA's "Family Jewels" document coming to light, this might be of interest to a few of you out there. I don't think it's necessarily insidious, but it's certainly interesting.

There are two versions of George Orwell's classic available on DVD, the 1954 animated version, and the 1999 computer animated/live action version. The 1954 animated version has the winning vote for interest and accuracy here at Prestwick House, although the newer one is visually quite interesting and packs a fair amount of star-power into the voices.


This article from the London Review of Books taught me something new about the movie though, that will make me go back to it with a little bit different eye.

In 1954, the CIA was in the midst of a battle with Communism for the hearts and minds of the world, so in light of that they sponsored the creation of a film version of George Orwell's classic, Animal Farm.


While Animal Farm has a decidedly Anti-Communist (or at least anti-Soviet) bent, according to this article the CIA wanted it a bit more cut and dry.

They used their influence on the film's ending. Instead of the book's ending where the pig rulers begin to work with the neighbors to oppress the farm animals, this cartoon changed it so that the neighbors came to the aid of the oppressed farm animals to overthrow the pigs. A subtle change, sure but an interesting view. In addition, apparently the CIA consultants suggested that Snowball is too likable a character, so they may have made him a little less appealing.

This is a fantastic opportunity to work with your colleagues in the history department to tie together the cold war, and it provides a new angle for a research report for your students. I love opportunities to discuss with students why decisions were made to vary from the source text. It's a way to get students to think critically about what they're reading (and it makes sure that students don't use the video as a replacement for the text).

Incidentally, the 1999 film also varies the ending of the film to show the eventual decline and fall of communism. Today's students will probably feel that this ending was inevitable and understood even in the day the book was written.

Great post Kieth. Interesting stuff - I think the newer version writes in the fall of soviet communism to some degree.