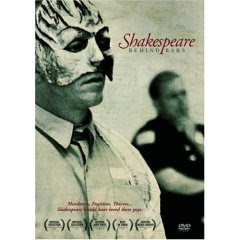 Paul Moliken, our Senior Editor, just alerted me to this movie -- looks like my Netflix queue is going to be full of Shakespeare for a while.

"If you’ve ever wondered about the redemptive power of literature on an individual’s life, then you owe it to yourself to watch “Shakespeare Behind Bars,” a documentary about a group of men in prison, who put on a performance of The Tempest. Their nearly half year of rehearsal (time counts for nothing in jail) is broken up by “Antonio’s” stretch in solitary confinement and by “Ariel’s” leaving for a maximum security prison. However, the rest of the cast, which is made up of a non-inmate volunteer director, plus murderers, thieves, and other extremely bad men, carry on splendidly.

We see them in rehearsal practicing lines, learning how to deliver them with meaning; we also see them speaking directly to the camera about their crimes and how Shakespeare has prepared them for life, both behind bars and after parole. The insights and personal revelations that the lines bring to these inmates is startling—almost all cry at their understanding of how the Bard, dead for four centuries, can relate to their particular individual weaknesses and to humanity in general.

“Caliban,” a huge, formidable, frightening prisoner, tries everything he can to get into the psyche of the monster. “Miranda” is especially touched by the similarities between himself and the character and feels that their pasts are exactly the same! “Prospero,” a veteran of several past productions, seems to be the most accomplished actor. The rest do overact for the most part, but their enthusiasm is necessary for the production to succeed, since the audience is composed primarily of other prisoners.

I found myself hoping that the two men who had their parole board hearings shortly after filming would be released into society. The Board disagreed with my opinion, however, and denied the paroles.

The cast offers some startling comments about their lives, along with some vulgarities, either of which might offend a lower high school class, but if you’re teaching The Tempest, or would like to offer a class a different perspective on Shakespeare’s genius, the movie is highly recommended."

at 3:21 PM
Email ThisBlogThis!Share to TwitterShare to FacebookShare to Pinterest

I heard about the play but I didn't know there was a documentary done on it. Thanks. (brianpbarfoot@yahoo.com)