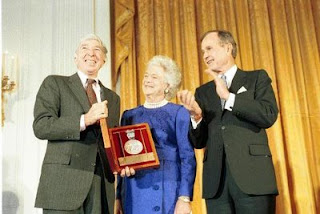 Whenever I hear people complain about there not being any great, living literary authors in America these days, I always respond with Phillip Roth and John Updike. Well, today, we lost one of those two when John Updike passed away from lung cancer at age 76.

I spent many of my formative years in the same town that Updike grew up in, Shillington, PA, so when I read Rabbit, Run in college, I could see all of his locations perfectly. I went to school in the same buildings as Updike, stood on the same corners, and probably knew the relatives of the people who inspired many of his characters. He was one of those rare authors who was able to chronicle the real thought process of his characters and his ability to draw them not only in their highs, but also in their lowest moments, made him a truly remarkable author.

Throughout his life he won nearly every major literary award -- the Pulitzer, the PEN/Faulkner, and dozens of others. He published over 50 books in his career.

While many of his books speak of topics that are appropriate for only the more mature high school student, they're definitely worth a read for any teacher who isn't familiar with his work.

"Suspect each moment, for it is a thief, tiptoeing away with more than it brings." - Updike, "A Month of Sundays" (1996)

Link.
at 6:09 PM
Email ThisBlogThis!Share to TwitterShare to FacebookShare to Pinterest