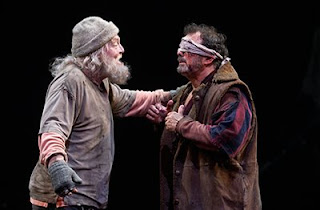 Before the 19th Century, Lear's dark side was often ignored, and the play was turned into a moral fairy tale with a modified ending in whic hteh King and his daughter are reunited and everyone learns a valuable lesson.

Robert Fall’s production, just wrapping up at ’s Shakespeare Theatre, is the complete opposite of the once-popular light-hearted versions. Moved from a timeless, medieval to a post-Soviet , this Lear focuses on the horrors caused by the nation’s loss of a clear leader and the power struggle that ensues.


The play opens with an extravagant ball room with a giant portrait of a young Stacy Keach, looking down, Stalin-like, at his birthday party, where he plans on dividing his kingdom among his three daughters. Lest the party’s atmosphere seem too serene, a DJ spins records and party goers fire automatic rifles into the air.

Throughout the play, the scenery deteriorates from this bright party to a battlefield with wrecked cars and trash strewn about the stage, mirroring the destruction of the kingdom as sister fights sister and brother fights brother. Murder and torture are brought to the forefront as we see ’s eyes ripped from his head and see Reagan strangle her sister Goneril on stage and take a gun to herself instead of their traditional offstage murder-suicide.

Obviously, this isn’t a Lear for the weak-hearted, but if you’ve ever wondered what Shakespeare would be like for the Soprano’s generation, this is a production for you. Even if it’s not the way that you’d produce the play, it’s always exciting to see a play that takes this many risks. 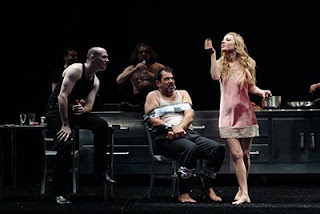 While I wouldn’t say this is a particularly student-safe version (on top of the violence, Lear, Cordellia, and Poor Tom all show full-frontal nudity), productions like this one always bring up interesting teaching opportunities. I’ve always been a fan of teaching Shakespeare through performance (see Dr. Cohen’s ShakesFear), and a production like this can be used to help your students see the relevance of a 400 year old play and help them imagine something more than “dudes in tights” as they do their own readings.

PS – At the end of this month and beginning of next month, The Shakespeare Theatre will be offering a free production of The Taming of the Shrew. I had a subscription to the classical plays this year, and I’d heartily recommend going to a performance if you’re in the DC area.

at 4:28 PM
Email ThisBlogThis!Share to TwitterShare to FacebookShare to Pinterest