No one likes the idea of forced conformity and “one size fits all” solutions. Not surprisingly, one of the chief concerns we hear from teachers about the Common Core State Standards (CCSS) is that they seem to take a cookie-cutter approach to improving education.

Indeed, the standards do represent a general push toward standardization, as their name implies. Perhaps most conspicuously, they propose a universal shift toward more difficult texts and tasks than have traditionally been assigned in recent decades. In the English Language Arts category, there is an emphasis on teaching literary and informational texts that are significantly more difficult than those currently taught in most American schools.

In the Common Core literature, this upward shift in text complexity is described in the rather arcane language of the Lexile Framework, as shown in the chart below.


Looking at these charts and figures, many educators fear that the standards do not adequately account for the variation among students and classrooms. Is it really feasible to take any given twelfth-grade classroom and suddenly begin teaching what we think of as college-level texts? What about the students who are struggling with the less challenging literature they are currently being assigned?

One educator who serves on Prestwick House’s National Curriculum Advisory Board described the concerns of many when she told us, “The idea that all students can learn to the same level of understanding, while high-minded, is just not true.”

There is good news, though. Within the CCSS framework, there is still room for teachers to exercise personal discretion and choose texts that make sense for their students.

The standards do not require teachers to do any of the following:


What, then, are the standards proposing for the text-selection process?


These three factors are depicted in the standards’ Appendix A as three parts of a triangle—and each element is given equal weight. 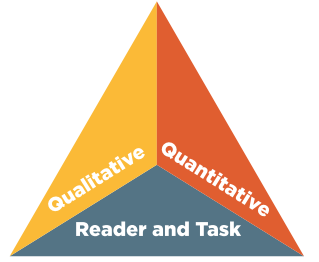 It’s important to note that the quantitative element—a computer-generated number, such as a Lexile score—is only one part of the triangle. This is the only factor that is not ultimately left to the judgment of a human being, whether it be a district administrator or an individual teacher.

What’s more, the standards directly state that quantitative measures are not always accurate and should not be used to overrule the judgments of educators. Appendix A says that educators are expected to balance quantitative and qualitative considerations by “employ[ing] professional judgment to match texts to particular students and tasks” (page 7). Quantitative measures will, in fact, be outweighed by the other two-thirds of the triangle in many cases.

In upcoming posts, I’ll be talking about the strengths and limitations of the Lexile Framework and other quantitative measures, as well as their proper application. I’ll also be unpacking the more subjective factors in selecting CCSS-appropriate reading assignments—the “qualitative” and “reader and task” considerations. When it comes to choosing texts for your classroom, the Common Core standards may not be quite as limiting as they initially seem.

Magedah Shabo is the creator and co-author of Prestwick House's Reading Informational Texts series. She is a writer, editor, and community college instructor. Her works are taught in secondary and post-secondary classrooms across the United States and have been featured on reading lists for courses at Harvard, George Mason, Fordham, and American University.