The Making of the Iliad and Odyssey Book Covers 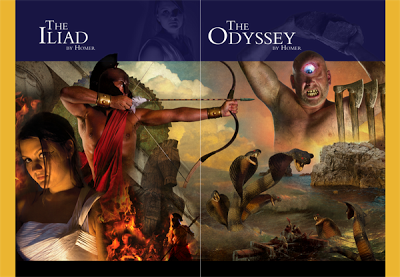 We recently decided to rebrand the Literary Touchstone Classics collection, our popular line of classic literature books. Although most of the over 70 titles in the collection will retain their original cover art, a few volumes warrant a fresh approach.

Sold as two separate books, Homer's The Iliad and The Odyssey were prime candidates for new cover imagery. It occurred to me that this would be a perfect opportunity to re-design each so when laid side-by-side they would form one continuous image — a technique I've always wanted to try. Essentially, the covers would represent the journey taken by Odysseus from his service in the Trojan War to his ten-year voyage home to Ithaca.

Starting off, I knew I wanted three major elements: Helen of Troy, an archer, and a Cyclops.

Hoping to use them on a reprint of The Iliad one day, I took photos of my niece a few years ago when she wore a Grecian-style dress to her high school formal. So, Helen was done.

The Greek archer on the cover of The Iliad would double as Odysseus on the The Odyssey's side — evoking the archery competition during which Odysseus outshoots and slays his wife's unwanted suitors.  I had the helmet from a previous photoshoot, but the key for this shot would be finding just the right bow and arrow for the period.


Setting up two light sources, each connected to the camera by a transmitter. I took over 75 shots using a 10-second timer, which allowed me to move the front light up or down and left or right.

Three Rivers Archery in Ashley, Indiana, was kind enough to donate the use of a Scythian bow, which is very similar to the ones used by the Greeks during the time of the Trojan War.

The arrow is wood, charred over a candle flame to get the decorative stripped effect. I tied feathers to one end of the arrow with leather string and in Photoshop placed a public domain image of a Hellenistic era arrowhead on the other.


For Cyclops I had to look no further than across my office. Chris, a fortuitously one-eyed graphic designer, agreed to portray the one-eyed Polyphemus and for a mere 20 bucks was persuaded to shave his head for the shoot … well, not really, but he did grow out his beard.

A poseable rubber snake was shot at various angles to depict
the seven-headed monster Scylla at the whirlpool Charybdis.
Photo by Larry Knox © 2013 All rights Reserved

Once all the elements were either created or gathered, the process of working out the composition began... 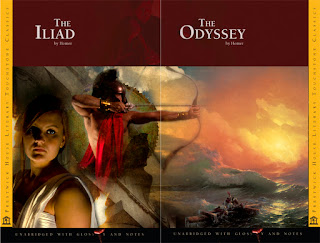 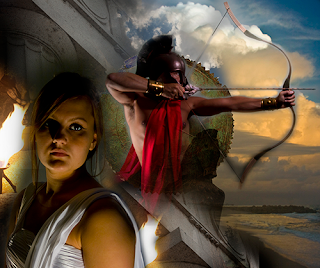 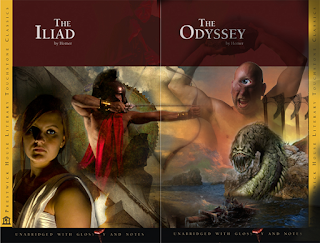 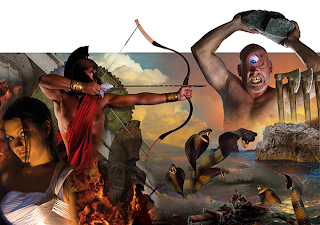 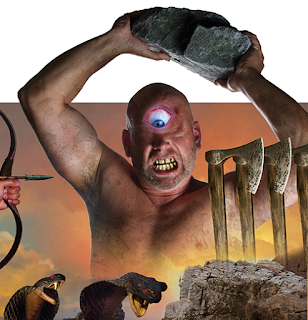