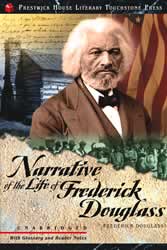 I know what a lot of students probably think when Narrative of the Life of Frederick Douglass is assigned in class: What are we doing reading a book published in 1845? It is true that Douglass’s narrative was written during a time when American life was very different from what it is today — the ramifications from slavery and tragedy consumed much of Douglass’s life.


However, my argument is this: just because Frederick Douglass lived a long time ago, during a time in American history that is hard to imagine, does not mean that his narrative has any shortage of lessons to teach the modern student. The reality of it is that most of Douglass’s story is centered around his difficult adolescence, being moved from plantation to plantation and master to master as he tried to learn the basic lessons about and for a successful life.


Frederick Douglass’s autobiographical account clearly illustrates the plight of a man who never lost sight of what he wanted in life. Even though students might find it hard to relate to what he went through, there is something universally meaningful about his mindset through it all. I’ve gathered five lessons I learned as I read his narrative, in the hopes that sharing them might spark more interest in your students to read his account and take it to heart:

1. There is never a shortage of things to be grateful for
As I read the first ten pages of his book, I kept a list of what Frederick Douglass didn’t have and what we have (and sometimes take for granted) today. The reason why I stopped after the first ten pages is because I decided that I wouldn’t be able to fit anything else in this post if I kept going. (And I have four more lessons after this one, so that just won’t do). Nonetheless, here’s some of what I compiled to be grateful for:


Douglass did not have any of these freedoms. Yet, these are freedoms that current Americans and teenagers approach as so basic and inherent in our citizenship that we barely have time to really think about what life would be like without them. Frederick Douglass survived much of his life without any of these things. For students reading this book, encountering Frederick Douglass’s personal story about his life without these taken-for-granted freedoms can prove to be very eye opening.


2. If you find something morally wrong, vow to change it and never give up

"I often found myself regretting my own existence, and wishing myself dead; and but for the hope of being free, I have no doubt but that I should have killed myself, or done something for which I should have been killed" (24).

I would venture to say that this is probably one of the most — if not the most — powerful lessons in Douglass’s narrative. Frederick Douglass speaks openly about his hatred for slavery throughout the book, and though he comes close to giving up a couple of times, he never does.


Frederick Douglass grows from a slave to a highly admired abolitionist. If he can fight against a force that overpowered him for so long and win, students today should also strive to stand by such worthwhile causes. Frederick Douglas’s curiosity and love for learning also falls into this category, as even though he was oppressed by his masters and kept from the books and other learning materials in their house, he kept searching for ways to learn elsewhere.


3. Overcoming your past is not impossible, no matter how terrible or gruesome it may seem
Nothing is too big to overcome. The past is in the past. Frederick Douglass grew to fight against and overcome the exact institution that oppressed him and caused him pain for much of the beginning of his life. In this same way, students can overcome and work against whatever it is that is in their past, holding them back. It is obvious in his book that Douglass is still plagued by the terrors of his past, but he seems to use that as fuel to tell his story and inform others of what happened.

I think the life-changing influence that his story has on others can especially be seen in the two forewords of the book. Both W.M. Lloyd Garrison and Wendell Phillips talk very highly and emotionally about Frederick Douglass’s story — hearing about how he overcame such hardships undoubtedly gives his readers hope in overcoming their troubles as well.


4. If you are unhappy, leave; try something new
Frederick Douglass talks about the lack of reservation he feels when he is asked if he wants to leave his first home in the following quote:

"The ties that ordinarily bind children to their homes were all suspended in my case. I found no severe trial in my departure. My home was charmless; it was not home to me; on parting from it, I could not feel that I was leaving any thing which I could have enjoyed by staying" (17).

This lesson ties in with number two. Though Douglass didn’t have a choice as to whether he could stay or go, the way in which he voiced these feelings proves that he was willing to try anything new in the hopes that it could possibly bring him a little further up and out of his unhappiness. This is important: instead of sitting around unhappy and unsatisfied with a terrible situation, do something about it.


5. Knowledge is freedom
This was the reason slaves weren’t given an education. Their masters and those that oppressed them believed that the more they knew, the easier it would be for them to retaliate, and that proved to be true. Frederick Douglass speaks about his yearning to learn throughout his book, and it becomes evident that once he starts to learn how to read and write he never wants to stop.


During one piece of his narrative, Douglass pinpoints when he first heard the word abolition; if he hadn’t the knowledge to read and write, he never would have figured out the meaning of that word or realized how important the word was to his future. While knowledge did make him more painfully aware of his lack of freedom in the beginning, it also helped him gain his freedom by the end. The fact that Frederick Douglass saw the importance of education and sought out ways to learn at such a young age is incredible and goes to show just how lucky students today are to have wonderful teachers and schools to teach them!


If you have any other life lessons you’ve learned from Frederick Douglass’s narrative, or would like to share other ways that helped you make your classroom more open to reading it, feel free to share and comment below!

Rachel Carey is a summer intern at Prestwick House. She is also a senior at the University of Delaware, where she studies English with a concentration in Creative Writing. During the school year, she is an active editor and writer for Caesura and The Main Street Journal, both of which are prominent literary magazines on campus, as well as Vice President of The Blue Pen Society writing club.