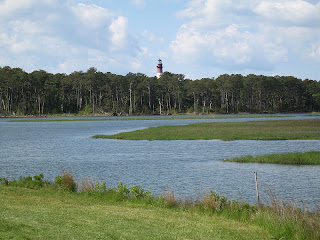 The books of Marguerite Henry have captivated generations of children, but one book in particular has made every young girl who is prone to daydreaming—myself included—want to ride a horse, lease a horse, own a horse, or be a horse. That book is Misty of Chincoteague.

A beautiful island with sandy strands and wild ponies running free sounds like a paradise, and an imagined one, at that. Chincoteague, however, is anything but fantastic: The small island town is located a few miles off ’s coast and is neighbored by a sister island, Assateague. Thousands of people flock to the spot each year to lie on the beaches, watch the annual Pony Swim, and even to visit the old Beebe farm. Henry fans get a sense of nostalgia experiencing a favored childhood book come to life.

I was fortunate enough to take a few days off of work this month and spend some time on the island, one of my favorite vacation spots for obvious reasons: I’m an enormous Marguerite Henry fan, having read seven of her books in one summer; I’m an avid equestrian and horse lover; and I can’t drive past a horse without screaming “horsey” at the top of my lungs.

Most importantly, however, the link between the island and one of my favorite books is still as strong as it was when I first visited Chincoteague at six years old. In my opinion, the work of a good children’s book is one that has as much of a hold on you as an adult as it did when you were drinking Juicy Juice and playing kickball. Fortuitously, Annie asked me to write a blog article while I was on vacation, so I did a little bit of research on Marguerite Henry, , and the real Misty. 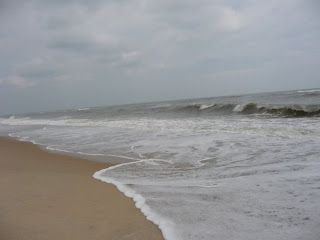 Marguerite Henry was born to Louis and Anna Breithaupt of on April 13, 1902. Henry (at that point, Breithaupt) was a sickly child and unable to go to school with the other children. At age six, she was struck with rheumatic fever, and the aftereffects left her bedridden until she was twelve. However, like all good writers when faced with a disability, Henry made the best of a bad situation and occupied her time reading and writing.

A love of books was engrained in Henry at a young age, as her father worked for a publishing company and encouraged his children to read. He once told Henry of a person who read every single book in their local library, and greatly inspired, she vowed to do the same. She became an ardent reader and particularly fell in love with novels by Zane Grey. Grey’s westerns gave Henry a love for horses and all other animals, and she dreamed that one day she would have a farm of her own.

One of the most memorable experiences of Henry’s childhood came when she was seven years old and her father bought her a writing desk for Christmas. She promptly began writing stories, almost all of which were about animals. At age eleven, she wrote a story called “Hide-and-Seek in Autumn Leaves,” a tale of a collie and a group of children, that she sold to a magazine for twelve dollars. It was her very first published work. 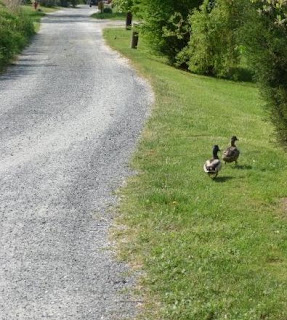 Henry recovered enough from her illness to graduate from , and then she went on to attend the Milwaukee State Teacher’s College, where she trained to become an English teacher. Soon after, she met Sidney Crocker Henry, and they were married in 1923. The couple never had any children, but not surprisingly, owned several pets.

During her career as a writer, Henry wrote fifty-eight books and short stories, some of the most famous being Justin Morgan Had a Horse, which received a Newberry honor; King of the Wind, a Newberry medal winner; Brighty of the Grand Canyon; Mustang, Wild Spirit of the West; and, of course, Misty of Chincoteague.

Marguerite Henry passed away in 1997 at the age of ninety-five. She lives on through her writing, and continues to influence today’s dreamy youth to appreciate the majesty and wonder of horses and the animal kingdom.

Chincoteague, an island in , was established in 1671 by families planning to make their fortune by either establishing farms or catching oysters. Over three hundred years later, Chincoteague remains a small maritime town, with an area of 9.63 square miles and a population of approximately 4,300 people. 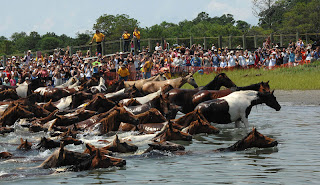 The most interesting element of the island is its herd of wild ponies, which reside primarily on Chincoteague’s sister island, Assateague. The ponies range in size from 13.2 to 14.2 hands and are a variety of colors, but are most commonly pinto. According to legend, a Spanish galleon carrying mustangs wrecked off the coast of , and the horses swam to shore and began living and breeding in the wild.

While it is possible that today’s Chincoteague ponies are the descendents of Spanish mustangs, it is more probable that they are descended from the domestic horses that the original families brought with them to their farms. At the time, the government taxed farmers on their fenced livestock, and it was common for people to set their animals loose so they would go unaccounted for. A few horses may have run away and established wild herd, and over three centuries, developed into today’s Chincoteague pony. 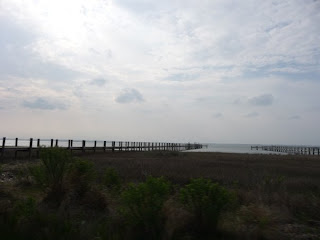 Starting in the 1700s, Chincoteague locals herded the wild ponies on Assateague and drove them to Chincoteague, where the town auctioned off new foals to farmers. This event evolved into the island’s annual Pony Swim.

On the last Wednesday in July, members of Chincoteague’s Volunteer Fire Company, also called the “salt water cowboys,” round up the wild ponies on Assateague. The ponies then swim across the narrow channel between the islands and are driven to the auction center off . The event is a big celebration for the town, and thousands of tourists come every year to see the horse and take part in the festivities. All proceeds from the auction go to the fire company and to the care of the wild ponies.

In 1946, Marguerite Henry visited with her illustrator, Wesley Dennis, to conduct research for a future book. While there, she attended the Pony Penning and met the Beebe family. The Beebes included Clarence and Ida Beebe, as well as their two grandchildren, Maureen and Paul. The family had recently purchased a little, pinto filly at the pony auction named Misty, as well as her dam, Phantom. 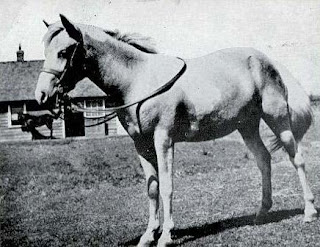 Henry fell in love with Misty and wanted to purchase her from the family, but Clarence Beebe knew how much the children loved the foal and refused to sell her. Eventually, an agreement was made between Beebe and the author, and Beebe allowed Henry to purchase the horse for $150 if she included his grandchildren in her next book.

Henry followed through with the agreement and published Misty of Chincoteague in 1947, featuring Maureen, Paul, and the little filly as the main characters of the work. Misty continued to grow up on Henry’s farm in , accompanying the author on book signings across the country. The book was adapted to a motion picture in 1961, but the horse actor in the movie is not Misty herself. At the time, Misty was pregnant with her third and most famous foal, Stormy. Stormy rose to fame when she became the main character of her own book, Stormy, Misty’s Foal. 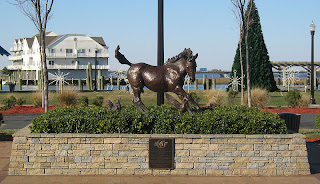 After their deaths, both Misty and Stormy’s bodies were preserved and kept on the premises of the farm until its close in 2004. Misty and her foal were then transferred to the Beebe Farm and are still on display for visitors to see. Misty is still remembered, and even has a memorial dedicated to her. This statue can be found on Chincoteague’s , not far from the auction house where she first met Marguerite Henry and the Beebes.

at 3:00 AM
Email ThisBlogThis!Share to TwitterShare to FacebookShare to Pinterest

Really nice blog, however I do have to point out that there are still Misty descendants alive and quite numerous today. The Allen family bought a number of them and now have the largest herd of Misty family ponies out there. I'm sure if you've been to Pony Penning Day you've seen the Chincoteague Pony Drill Team (which several Misty family members participate in), which performs every year at the start of the auction. They also have performances at the Chincoteague Pony Center. In fact Rainy's Boy, currently the oldest living great-grandson of Misty (now 25 if I'm not mistaken) was the last Misty family pony living at the miniature horse farm. Obviously not dead as many have mistakenly thought, his story has just been published in a book called "The Forgotten Pony" by Jessie Anne Friend, who was mentored by Marguerite Henry herself. He made a special visit to Chincoteague for Pony Penning this year with his owner and Ms. Friend.

Oh, I do have one question though. Why did you write that Chincoteague is anything but fantastic? For all the nice things you had to say about it I was a bit confused because after reading that sentence I thought you were about to rip into the island and give readers a rant about it being horrible or something.

Thank you very much for your response! It's nice to find someone else who is interested in Chincoteague, Misty, and Marguerite Henry. Furthermore, thanks for the correction about Misty's descendants. I am very interested in that book you suggested, but I can't find it on Amazon.com or Barnes & Noble. Is it something that is available for purchase only at the Pony Center?

Also, just to clarify, when I said "anything but fantastic," I was not using the modern usage of fantastic, intending to mean "cool." What I wanted to say was that Chincoteague is not fictitious or imagined (i.e., fantastic) but a very real place--and one of my personal favorite vacation spots!

Thanks again for your reply. I hope you have a wonderful holiday season.

Thank you, Kit, for providing this information. We, too, enjoy Chincoteague Island and have on our farm in the Shenandoah Valley two Chincoteague ponies. We recently vacationed in Chincoteague and visited for the first time the new museum there, which has on view for the summer both the preserved Misty and Stormy, as a part of the 50 year celebration of the movie based on M. Henry's book. The museum is a treasure trove which you may or may not already be aware of. Again, thanks for sharing your wrtg.

I have a question about your statement, "Starting in the 1700s, Chincoteague locals herded the wild ponies on Assateague and drove them to Chincoteague, where the town auctioned off new foals to farmers." Did you really mean 1700s? Would you please cite where you located that information? Thanks and thanks and ever thanks!

I did find a source stating that the pony penning began as early as the 1700s: http://www.chincoteague.com/ponies.html

I hope that helps!