Invisibility and the Descent into Madness: One Art Director's Journey 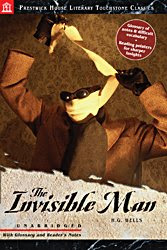 Invisibility as a super power, according to H. G. Wells, may have some, well… "side effects" associated with it. Insanity would be the number one, but I would guess hypothermia would run a close second. Taking this into consideration, next to flying, it still has to be one of the more popular super powers that, at one time or another, most of us have fantasized about.On a design level, I can attest to the madness associated with this ability.

I was assigned the task of creating a cover image for our Literary Touchstone Classic edition of Wells's classic novel, The Invisible Man. Definitely a challenging and creative assignment, but with some Photoshop skills under my belt I figured it wouldn't be too difficult to pull off the whole invisibility thing. This is where the madness sets in.

I never realized how difficult it would be too render an invisible person with even a slight degree of realism. Oh sure, I could have made it easy and photographed him in a dark room with bandages wrapped around his head like a jazz-age-mummy but I wanted the classic Hollywood still effect with dramatic up-lighting and maniacal hand gesturing — I would need lighting for that. Specific lighting. Casting eerie shadows on the wall. 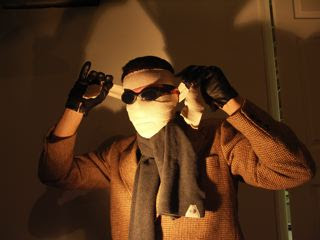 I could visualize the image, and my next step was to set about lining up a model, the clothes, and a location. The model was a no-brainer. My first and only choice was my younger brother for a couple reasons: one he is an avid fan of the 1930’s classic horror movie genre and everything associated with the era; he's a ham and has no problem whatsoever putting himself completely out there for the sake of "art;" and finally, he's my brother and he agreed to work for free! (I had him sign a model release just in case he changed his mind.)

For the location all I really needed was a space where I could shut out all light (except for my direct source), and preferably a blank, bare wall against which the subject might stand to capture the shadows smoothly and without distortion. My brother's basement fit the bill perfectly (and again, no charge). 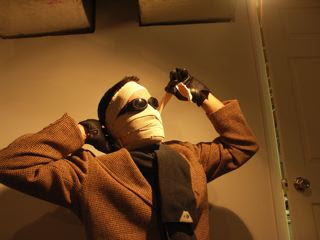 My vision was to photograph him from the waist up, so I only needed a jacket, shirt, and scarf in a style that would have been used in the 1930's. My brother borrowed a jacket from his wife's grandfather and the warm, brown tweed set just the right nostalgic tone. The scarf and shirt were easily found around the house. The last but most important prop was the glasses. They couldn't be just any ordinary sort of glasses and needed to have side covers (preferably leather) and appear almost goggle-like. Sure, piece of cake, just pop down to Target and pick some up on the 9.99 carousel — hmmm, no such luck. I visited a few antiques stores. Nada. So my brother ended up borrowing a very expensive pair of military issue goggles from a local Army Navy Store connection for the weekend. They looked amazing. (Okay, in retrospect, perhaps I should have paid him). The last prop was an Ace bandage that I picked up at a local drug store.

The shoot went off without a hitch and I ended up with more images than I needed. Here's a short video made with some of the photos: 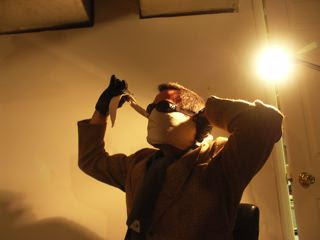 The difficult and most time consuming part of the process turned out to be working in Photoshop. I had to “clone” out the model’s actual head yet leave the wall and the shadow of his partially wrapped, partially transparent head, bandage and hands casting the shadow they would have made had he really been invisible. After many, many Photoshop layers and countless hours of “cloning,” I managed to pull off the effect at least to a degree that was acceptable. Mapping a Victorian wallpaper pattern on the wall helped to break up the flat planes of color so that some of the tougher cloned spots would be less discernable. The wrists proved just as problematic but again, with some cloning and many layers I was able to achieve the desired effect.

Here's where the real insanity kicked in. While working on the cover image, I had the idea that it might be cool to have the chapter heads show Griffin fading into invisibility and, of course, into madness. Similar to the Crackerjack flipbook prize we coveted as kids, I felt it would add drama and movement to the book. The "animation" effect doesn't quite work in the printed book, as there are just too many pages in between to give the required "persistence of vision" effect needed to create the illusion of animation, but the idea that the reader might slowly discover the transformation of the novel’s protagonist without being told about it beforehand seemed exciting — something I would have gotten a kick out of when I was in school. 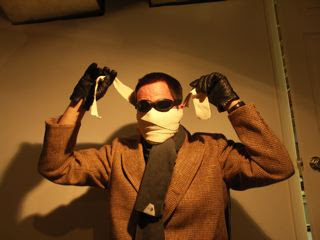 But now, as if the invisibility effect wasn't difficult enough, I needed to slowly fade the head, wrists, and their shadows in stages. Yikes! If I would have had this brainstorm prior to photo shoot, I might have tried to photograph the model’s jacket separately with the wrists and neck areas empty with the exact same lighting. This would have added considerably to the length of time it took for the actual shoot, and the idea of reshooting was logistically out the question.

With a little luck and some serious “cloning” and “duplicating,” I managed to pull off the effect I wanted without a lot of compromise to the quality of the image. The relatively small format of 6 x 9 eliminated the need to worry about superfine detail, and gave the desired effect.

So in short, The Invisible Man cover took longer than the some other covers in the series, but in the long run, I feel like it was worth it. Who would have guessed that designing a cover around something that can't be seen would be so labor intensive?

at 4:11 PM
Email ThisBlogThis!Share to TwitterShare to FacebookShare to Pinterest