It is Hard to Retain Uniqueness in a World that Encourages Conformity... 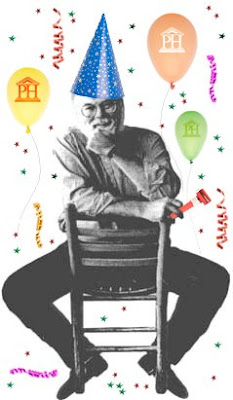 In celebration of author Robert Fulghum’s birthday, I’d like to share a chapter from his award-winning book, All I Really Need to Know, I Learned in Kindergarten: Uncommon Thoughts on Common Things.

This particular chapter in a very quirky, touching book was introduced to me by one of my favorite English teachers and Declamation coach, Mr. Corrigan, while he was helping me to choose a piece for the Declamation team. This team was made up of a group of students who competed in forensics tournaments versus students from other schools in our area, each memorizing a speech to recite and then delivering it in front of peers and a panel of judges.

The following excerpt was my very first speech during my three years competing at what would quickly become my favorite after-school activity. As one of those teachers who always knew that I was a “mermaid,” Mr. Corrigan helped me to discover my love of language, develop my skills, and ultimately helped me to realize my own potential.

So as a thank you to Mr. Corrigan from a previously awkward eleven-year-old and a wish for the very happiest birthday to Mr. Robert Fulghum, an author whose “uncommon thoughts on common things” have stayed with me throughout my adult life, I give you an excerpt from the chapter entitled “Mermaids.”

Giants, Wizards, and Dwarfs was the game to play.

Being left in charge of about eighty children seven to ten years old, while their parents were off doing parenty things, I mustered my troops in the church social hall and explained the game. It's a large-scale version of Rock, Paper and Scissors, and involves some intellectual decision making. But the real purpose of the game is to make a lot of noise and run around chasing people until nobody knows which side you are on or who won.

Organising a roomful of wired-up gradeschoolers into two teams, explaining the rudiments of the game, achieving consensus on group identity - all this is no mean accomplishment, but we did it with a right good will and were
ready to go.

The excitement of the chase had reached a critical mass. I yelled out: "You have to decide now which you are - a GIANT, a WIZARD, or a DWARF!"

While the groups huddled in frenzied, whispered consultation, a tug came at my pants leg. A small child stands there looking up, and asks in a small, concerned voice,

"Where do the Mermaids stand?"

Where do the Mermaids stand?

"Where do the Mermaids stand?" says I.

"There are no such things as Mermaids."

She did not relate to being a Giant, a Wizard, or a Dwarf. She knew her category: Mermaid. And was not about to leave the game and go over and stand against a wall where a loser would stand. She intended to participate, wherever Mermaids fit into the scheme of things. Without giving up dignity or identity. She took it for granted that there was a place for Mermaids and that I would know just where.

Well, where DO the Mermaids stand? All the "Mermaids" - all those who are different, who do not fit the norm and who do not accept the available boxes and pigeonholes?

Answer that question, and you can build a school, a nation, or a world on it.

What was my answer at the moment? Every once in a while I say the right thing. "The Mermaid stands right here by the King of the Sea!" says I.

(Yes, right here by the King's Fool, I thought to myself.)

So we stood there hand in hand, reviewing the troops of Wizards, and Giants and Dwarfs as they roiled by in wild disarray.

It is not true, by the way, that Mermaids do not exist. I know at least one personally. I have held her hand.

— taken from All I Really Need to Know I Learned in Kindergarten -Uncommon Thoughts on Common Things (pp 83-85) by Robert Fulghum; a Harper Collins paperback ISBN 0-586-20892-5


at 12:01 PM
Email ThisBlogThis!Share to TwitterShare to FacebookShare to Pinterest

Oh, Annie, Mr. Corrigan is going to love this. It made me cry!