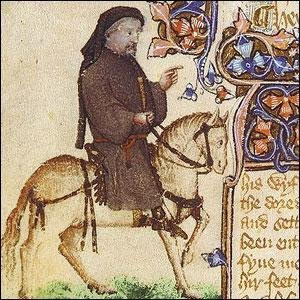 I am thrilled to announce that this Summer, Prestwick House will be releasing a revised version of our Literary Touchstone Classic, Canterbury Tales, with an updated glossary and so many new footnotes that you'll know more about the medieval period and classical mythology than you ever wanted to know.

Since I've been eating, sleeping, and breathing Canterbury Tales for the past couple of weeks, a Chaucer-related blog post was almost inevitable.

I invite you to test you basic, Canterbury Tales knowledge and

Read the clues below and determine which Canterbury Tales pilgrim is being referred to. Post your answers in the comments section below. All of the clues come from "The General Prologue," but as tempting as it may be to look up the answers, don't cheat!

Pilgrim A
• wears a tunic of coarse silk, discolored by his armor.
• loves honor and chivalry.
• is the first pilgrim to tell a tale.

Pilgrim B
• wears bright red hose.
• hates when other women give offerings before her in Church.
• has been to Jerusalem three times.

Answer: The Wife of Bath

Pilgrim C
• knows only two or three Latin phrases.
• loves to eat onions and leaks.
• has a face covered in pimples and boils.

Pilgrim E
• spends all of his money on books.
• is reserved in manner and hardly ever speaks.
• prays for the souls of his benefactors.

Pilgrim F
• carries pins and trinkets to give to pretty girls.
• knows every innkeeper and barmaid in town.
• has a bit of a lisp.

Pilgrim G
• used to be a carpenter.
• has a horse named Scot.
• manages land very efficiently.


BONUS QUESTION: What is the name of The Host?
Answer: Harry Bailey

at 2:28 PM
Labels: Canterbury Tales
Email ThisBlogThis!Share to TwitterShare to FacebookShare to Pinterest