"Should the wide world roll away"
STEPHEN CRANE

Should the wide world roll away,
Leaving black terror,
Limitless night,
Nor God, nor man, nor place to stand
Would be to me essential,
If thou and thy white arms were there,
And the fall to doom a long way.


In one sentence, Crane reveals a romantic love greater than anything else in existence. He surprises the reader with his last few words, as his terse, negative poems usually do, but in this case, the contrasting final thought leaves the reader with a sense of contentment, rather than one of decay and death.

Crane’s typical negativity is stated in the first three lines: If nothing of existence were left, if only fears and nightmares ruled his imagination, and if he knew of no way out of this unending horror—nothing would be necessary, or even able, to sustain him.

The next two lines, placing God first, man second, and man’s accomplishments third, reiterate the blackness of his feelings, the depths of his despair. However, the juxtaposition of “white,” in striking contrast to the black picture he paints earlier, makes any reader wonder about what point Crane is going to conclude with.

The final line delineates the object of his love, one that is not superficial and ordinary, but ineffable and eternal. He would not care anything about the death of mankind or of God if he only could remain in the arms of his beloved and die with her at some time in the distant future.

The short phrases enclosed in commas add to the jarring sound of the poem, and the repeated “nor” epitomizes the strength of the destruction, but the alliterative “thou, thy, there,” soften the end of life, which would be insignificant to Crane, anyway, were his love present at that end.

-- Paul Moliken, Senior Editor
Find this poem, and others, in these great books: 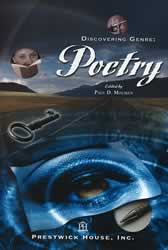 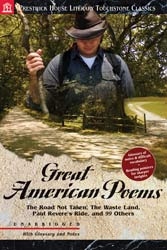 at 8:00 AM
Labels: National Poetry Month, poetry, recommendation
Email ThisBlogThis!Share to TwitterShare to FacebookShare to Pinterest