So it may be a bit past the Ides of March, but this cover shoot for the Literary Touchstone Classic edition of Julius Caesar was just too much fun to pass up. Our talented Senior Graphic Designer, Maria Mendoza, aka Jen Mendoza, created this cover using some fabulous shots of model J.P. Lutz outside of the art museum in Philadelphia, PA. 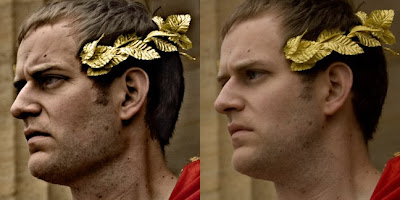 What was your inspiration for this cover?

We set the bar pretty high with other Touchstone titles that we’ve designed since I started working here 2 years ago. We have steered away from using stock photography and compose our own photo shoots. So, aside from being inspired by the rest of PWH’s Touchstone line, I used the graphic novel-style of the movie 300 used a “crush” technique to up the contrast and make the image look eerie. I felt that style would work really well for Julius Caesar.

How did you choose your model?

In the past, and in a pinch, I have run down the list of people that I know and cross-referenced that list with the persona I am trying to capture. Considering that we have only about a 6” x 6” area for the art, the focus would be directly on the subjects head and upper torso. So, I needed someone with strong facial features and broad shoulders. I knew the model, JP, would be perfect for the cover. He has the furled brow thing going for him. Photoshop and the costume would take care of the rest. 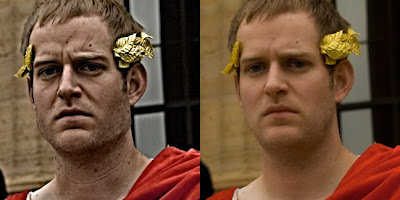 How did you decide on a location?

First and foremost, Columns. Like I said, we don’t have a whole lot of space to work with on the cover and what better way to depict a roman setting than columns—big, massive columns. So, The Philadelphia Museum of Art worked both in logistics and setting. I didn’t really investigate other locations because I found the to be the perfect spot after taking an initial round of photos sans the model. Plus, I had done another cover there, Great Stories of Horror and Suspense, so I was familiar with the location.

How about the costuming? Where did that come from? Did you try different things? We generally use Actor’s Attic, in , for the costuming on our covers. Their costumes are very authentic-looking and shoot well in photos. Caesar and the conspirators were all in togas when he was assassinated so I knew what we needed.

What was involved in your process?

The covers all pretty much follow a similar process. We compose rough concepts of a cover based on research, photos, and a single moment or characteristic of the story that will form and immediate familiarity with the reader to the story. The rest is top-secret.

What kind of camera did you use?

We mostly use a Canon EOS Digital Rebel Xti. It rocks.

at 10:37 AM
Email ThisBlogThis!Share to TwitterShare to FacebookShare to Pinterest