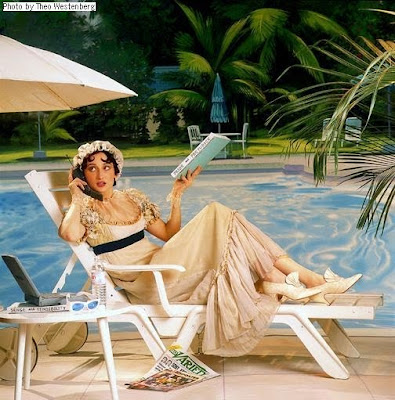 Jane Austen, while she has always been a favorite writer of literature enthusiasts and hopeless romantics, seems to have grown in popularity this past decade. With comic spoofs like Pride & Prejudice and Zombies, modern-day interpretations like Bridget Jones' Diary, sequels like Emma & Knightley and The Pemberley Chronicles, month-long PBS specials, and even a book entitled Jane Austen’s Guide to Dating, people are being exposed to Austen’s work that otherwise would not be.

Each avid reader of Austen, whether she (or he) is a veteran Austenite or a newcomer, has a unique reason for falling in love with the novels. It could be for Austen’s charismatic heroines, her wit and use of satire, or even the way all of her stories have happy endings, albeit with several surprising plot twists. My personal love of Jane Austen, however, comes from the beautiful way Austen uses language, particularly free indirect discourse.

What is free indirect discourse?

Free indirect discourse (FID) is a form of third person omniscient point of view in which the narrator’s and a character’s thoughts are indistinguishable from one other. While the narrator commonly uses a traditional, formal voice and writes about events in the past tense, he or she occasionally assumes the mind of the character, and as a result, takes on the character’s ideas, diction, syntax, and language idiosyncrasies. In some forms of FID, the author’s language may even shift into the present tense when the character’s thoughts are presented, responding to events in the story as if they were currently happening.

The form is easier to understand in exemplar, and many readers will immediately recognize the style as one that is distinctly Austen-esque:

“Her astonishment, as she reflected on what had passed, was increased by every review of it. That she should receive an offer of marriage from Mr. Darcy! that he should have been in love with her for so many months! so much in love as to wish to marry her in spite of all the objections which had made him prevent his friend’s marrying her sister, and which must appear at least with equal force in his own case, was almost incredible!”

The first part of the passage is given from the point of view of a regular third person omniscient narrator, who is keenly aware that the main character, Elizabeth Bennet, is shocked by the marriage proposal. However, the rest of the passage is from Lizzy’s perspective, but filtered through the narrator. The opinions expressed are not the narrator’s own; the proposal is not a shock to him or her, for the narrator has long since been aware of Mr. Darcy’s thoughts, opinions, and motivations. Additionally, since the narrator knows how the story ends, it is most likely that the underlying feelings of contempt are Lizzy’s own, since she is oblivious to the misunderstanding between them.

The following is an additional example of FID:

This apartment, to which she had given a date so ancient, a position so awful, proved to be one end of what the general's father had built. There were two other doors in the chamber, leading probably into dressing-closets; but she had no inclination to open either. Would the veil in which Mrs. Tilney had last walked, or the volume in which she had last read, remain to tell what nothing else was allowed to whisper? No: whatever might have been the general's crimes, he had certainly too much wit to let them sue for detection.

Catherine has been so influenced by Gothic fiction that she expects the late Mrs. Tilney’s bedroom to be dark, gloomy, and haunted, just like a setting in an Ann Radcliffe novel. However, she is disappointed (and a bit relieved) to discover that the room is ordinary and uninteresting. The phrase “leading probably into dressing-closets” is an assumption of Catherine’s, for the omniscient narrator knows to where it leads. Furthermore, the question asking whether Mrs. Tilney’s belongings would reveal the mystery of her death—which disappointedly, no spirits could disclose—is Catherine’s, in addition to the conclusion that the general would lead nothing behind as evidence of the suspected crime.

If you would like to find more examples of free indirect discourse, check out other Jane Austen novels and teaching guides from PrestwickHouse.com.

at 10:14 AM
Email ThisBlogThis!Share to TwitterShare to FacebookShare to Pinterest

Amazing!, i was looking for some info about this.

it was very helpful,the examples and the definition.

This was very helpful I do appreciate it :). Thank you

Thanks, it was very helpful and it's great to read about it from someone who's enthusiastic about it.

I believe the Northanger Abbey quote is from Chapter XXIV? :D thought you might like to know