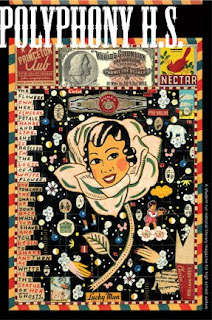 Here’s a new way to get your students psyched about writing: give them a chance to get published. That’s the idea behind Polyphony H.S.—a national literary magazine written and edited by high school students.

Just five short years ago, Polyphony H.S. was still a glimmer in the eyes of high school English teacher and writer Billy Lombardo. He wanted to establish a platform for young poets and storytellers, and he wanted to do it on a national scale. With this vision in mind, he recruited one of his students, Paige Holtzman, to help him solicit and edit submissions from around the country. In April of 2005, they published the best of these poems, short stories, and essays, and the first edition of Polyphony H.S. was born.

Now, only four editions later, the magazine is in full flight, boasting glowing reviews from bestselling authors and the American Library Association's Booklist magazine. Hundreds of submissions pour in annually from across the US, and a few from as far away as , , and —P.H.S is making a name for itself around the world.

But perhaps the most impressive thing about this publication is the fact that it's run by a network of student editors from all over the country. They spend hours reviewing, culling, and polishing manuscripts on a volunteer basis, all for the love of literature.

How can you and your students get involved?

Subscribe to the magazine, and share it with your classes. Reading the published works of their peers is sure to inspire your students with creative ideas of their own.

Submit your students’ poems, essays, and stories. Each submission will automatically be entered to win the Claudia Ann Seaman Award for Young Writers and a $500 cash prize, along with publication in Polyphony H.S. While you're at it, encourage your students to volunteer their services as editors.

Spread the word to fellow English teachers, and help build awareness of this unique opportunity.

Who knows—you might even want to start a literary magazine at your own high school.

For more information, check out Polyphony H.S. on the web.

at 4:30 PM
Email ThisBlogThis!Share to TwitterShare to FacebookShare to Pinterest