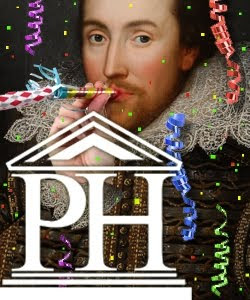 
Except it isn’t really his birthday, and he might not even be who we think he is to begin with.


William Shakespeare, aka The Bard of Avon, is one of those GREAT WRITERS whose life is shrouded in mystery, doubt, innuendo, and lack of real evidence—so anything anybody says is true.


No one knows when Will was born. The third child of John and Mary Shakespeare (nee Arden), he was baptized, according to the record of Holy Trinity Church in Stratford-on-Avon (sometimes Catholic and sometimes Anglican, so W.S. could have been either), on April 26, 1564. Since they baptized kids young back then, the popular speculation is that little Bill was born three days earlier, on April 23.


April 23 was also the date of Will’s death (but not the same year), so having him born and die on the same date (but several years apart) is kind of fun. So much fun, in fact, that some scholars believe that that is how the April 23, 1564, birthday rumor began.


When he was eighteen, randy Will married the much-older Anne Hathaway (eight years back then was a pretty big age difference—actually, it’s nothing to sneeze at today, especially when it’s an older-woman-younger-man couple—why do you suppose we have such a double standard, anyway?).


Most scholars agree that Shakespeare’s wife is not the same Anne Hathaway as the twenty-first-century American star of Get Smart and The Devil Wears Prada. There is no evidence to suggest that Anne Hathaway ever appeared on stage in one of her husband’s plays. So adamant was he about his wife not being in show business (sort of like a ramped-up Ricky Ricardo) that there was a complete and total ban on women appearing on stage in all of England!


There is no evidence to support the contention that Anne tried to return his un-opened birthday presents.


There is no one alive today who is a direct descendent of William and Anne Shakespeare (nee Hathaway). His sister, Joan (Hart), however, has numerous living descendants.


So, Happy Birthday, Bill … whenever it is and whoever you are.

at 2:57 AM
Email ThisBlogThis!Share to TwitterShare to FacebookShare to Pinterest