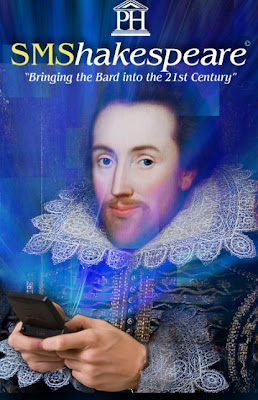 This week, Prestwick House is proud to announce a new line of products specifically tailored to 21st century students. The new SMShakespeare™ series features some of Shakespeare’s greatest plays and boasts a unique feature that sends the Bard’s text directly to students’ cellular phones via SMS.

Cellular phone use in education is becoming increasingly more mainstream with tools such as Google SMS, which allows students to search for information via text message; programs like Text2Teach™, which help teachers monitor student attendance; and applications like MobileTutor™, TouchMaths™, and mDictionary™, which fill a variety of other needs in the classroom.

Business Week reporters Cathie Norris and Elliot Soloway suggest, “Students are already bringing these technologies to school; we just need to allow the kids to bring them out of hiding and use them in their classroom for curricular purposes… rather than spending a bundle on building a sophisticated wireless infrastructure and another bundle on maintaining it, a school could make use of cell-phone computers and the telecoms' existing wireless infrastructure for Internet access.”

In keeping with traditional text message lingo, Prestwick House’s new SMShakespeare™ line takes the text of each of the Bard’s plays and shortens it for increased readability in the SMS medium. From Hamlet’s famous “2 b or not 2 b” soliloquy to Juliet’s beautiful lament “a @->--- by ne other name” to Macbeth’s “2mrw n 2mrw n 2mrw” speech, all of the most popular plays are represented.

In addition to Shakespeare’s text, students will receive periodic picture messages containing illustrations of important scenes as depicted by LOLCats™ to increase understanding. Similarly, tweeted scene summaries and study guides will be available via Twitter’s SMS feature, and students will have the option of becoming a fan of “Pr3stw1ck Pwns SMS” on Facebook to get the most recent software updates, Shakespeare memes, and various other LOLs to increase retention of Shakespeare’s works.

at 2:53 PM
Email ThisBlogThis!Share to TwitterShare to FacebookShare to Pinterest