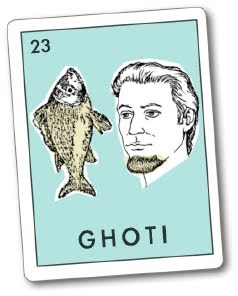 You probably already know this “phonetic spelling” of fish. You probably believe it was devised by playwright, satirist, and language reformer George Bernard Shaw. (It wasn’t, but that’s an irrelevant detail.)

If you haven’t yet met ghoti and wonder how it could possibly spell fish, here’s the rationale:

sh = ti as in fiction

Now, with all due respect to “language reformers,” here’s why the creator of ghoti is wrong—possibly even disingenuous (don’t you hate it when people with an obvious agenda manipulate facts and posit half-truths to lull the unsuspecting into tacit agreement?).

Granted, there are plenty of words in which the letter combination gh represents an f sound—enough, laugh, cough, rough, tough—but am I the only one to notice that every one of these words ends with the combination in question?

So, whatever sound gh originally represented (probably that German guttural that we really don’t have in English but still shows itself in words like daughter and slaughter), it seems that that sound devolved into an f only when it occurred at the end of the word!

So gh = f is most likely not so much an idiosyncrasy of the English language as it is the institutionalization of someone’s pronunciation error.

I cannot think of or find another word in the English language in which the letter o represents an i sound like in women. So, does the pronunciation of this particular word reflect a vagary of the language or, again, some early mispronunciation that somehow became standard?

Again, what we have here is not a flaw or inconsistency in the language; we have a language shaped largely by the standardization of the non-standard.

Now, I’m not being a snob here, and I’m not bashing the characteristics that make English a rich and expressive language. Our ability to adopt and adapt words and expressions, to recycle old words and phrases with new connotations, and our openness to metaphoric and figurative uses are strengths, not weakness.

They help us, I believe, to understand more deeply and to communicate more fully what we understand. They help us to interact with each other on a more rich and meaningful level.

But what I am ranting on is this:

Despite its occasional inconsistency and caprice, the English language is governed by a number of knowable and predictable conventions. Even the “vagaries” noted above can be interpreted as conventions of a sort:

gh, when it appears at the end of a word, tends to be pronounced like an f;

tion, when it appears at the end of a word, tends to be pronounced like shun.

And these conventions are no more mysterious, or challenging to teach or to learn than the conventions that explain pronunciations of consonant blends like sh and th or diphthongs like ou and ei.

Why is the awk awk? What’s wrong with a frag?

And forget about spoken English!

No one questions the importance of thesis, support, logic, and all of the other elements of good content. None of us wants a class of students who use language beautifully but say nothing (we have enough of them in Washington and our state capitals, right?). If you’ve been in education long enough, you can probably say, “been there, done that” because that was pretty much the state of English instruction before, say, 1980.

We have, however, created almost the opposite—a generation and a half of students who have wonderful ideas but not the skill to communicate them. These are the students (and former students) who flood your inbox with all of those posts that mockingly ask: “Why do we park on a driveway and drive on a parkway?” (The implication is, of course, that since neither the sender nor the receiver knows the answer, there must not be a satisfactory answer.)

For most questions like that there are satisfactory answers. We only need to learn them and to teach them.

When people want to criticize the English language as incomprehensible because it allows words like ghoti to occur...well, words like ghoti don’t occur, and the reason is that they do not conform to knowable and predictable conventions about consonant blends, diphthongs, and the ending syllables of certain words.

Why aren’t we teaching these language conventions in our English language arts classrooms?

Shaw’s concerns about language weren’t limited to only spelling. Read (or reread) his Preface to Pygmalion:

The English [insert “Americans”] have no respect for their language, and will not teach their children to speak it. ... Finally, and for the encouragement of people troubled with accents [insert “language difficulties”] that cut them off from all high employment [emphasis mine], I may add that the change wrought by Professor Higgins in the flower girl is neither impossible nor uncommon.

English is such a hot topic these days—“official” language, “only” language, however you want to couch the debate—that those of us who claim to teach English language arts should really stop hiding behind our literature anthologies and wringing our hands in despair about how our language is abused by those with or without agendas.

Instead, we should start to teach to teach the subject matter we’re charged with teaching.

at 1:56 PM
Email ThisBlogThis!Share to TwitterShare to FacebookShare to Pinterest

You'll get no argument from me, though my bias is towards the teaching of math and science.

Example: It seems, generally, that if one didn't major in a science one has no idea what theory really means.

Similarly, the concept of opinion seems not to be taught these days. (Every opinion is not equivalent. If you're ignorant on a subject, don't tell me your opinion of it. I'd rather listen to someone who actually knows something about the question.)

Or, to put it briefly, I believe I agree with you.

Or for that matter, why don't we teach other languages sooner (or at all)? A lot of what I know and understand about English I retrofitted while learning other languages. What a disadvantage we are at, and will be at in the future, if we are the only monolingual people in the world (and not even proficient in that language)!