ASC is "Gaga" for Claimant to Shakespeare's True Authorship 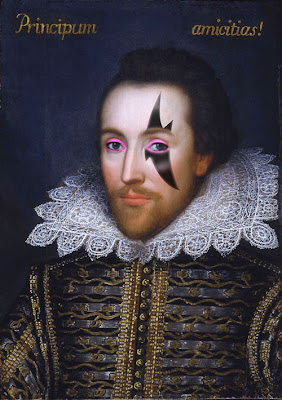 According to a shocking revelation from the American Shakespeare Center, "Rigorous study and research has unearthed a shocking revelation regarding the authorship of the works commonly attributed to William Shakespeare. Archival findings prove beyond any doubt, pop icon Lady Gaga penned the famous works treasured by western culture. What follows here is a truncated summary of the evidence."

Below is some of the "evidence" presented to support this claim.

This excerpt from Timon of Athens, IV, iii reads like a Gaga manifesto outlining her "Love Game":

"Hadst thou, like us from our first swath, proceeded
The sweet degrees that this brief world affords
To such as may the passive drugs of it
Freely command, thou wouldst have plunged thyself
In general riot; melted down thy youth
In different beds of lust; and never learn'd
The icy precepts of respect, but follow'd
The sugar'd game before thee. But myself,
Who had the world as my confectionary,
The mouths, the tongues, the eyes and hearts of men
At duty, more than I could frame employment,
That numberless upon me stuck as leaves
Do on the oak, hive with one winter's brush
Fell from their boughs and left me open, bare.
Timon of Athens: IV, iii"

In The Taming of the Shrew, III, ii, she describes her own sense of style and how important fashion is:

"with a linen stock on one leg and a
kersey boot-hose on the other, gartered with a red
and blue list; an old hat and 'the humour of forty
fancies' pricked in't for a feather: a monster, a
very monster in apparel, and not like a Christian
footboy or a gentleman's lackey.

In this quote from Hamlet, V.i, isn't the Melancholie Prince really saying that he can't read a poker face?

"Where be your gibes now? your
gambols? your songs? your flashes of merriment,
that were wont to set the table on a roar?"

The Winter's Tale, IV.iv, reiterates what Our Lady Gaga has said numerous times regarding how she likes to play:

"if it be rough, it will please plentifully."

Sonnet XX is reminiscent of and mirrors her "Bad Romance"––it's clear as day!

But since she prick'd thee out for women's pleasure,
Mine be thy love and thy love's use their treasure.

In Hamlet, I.i, Lady Gaga points out an integral component to looking good and encourages all women to follow suit:

"God has given you one face, and you make yourselves another"

Beautiful, dirty, rich––this Merchant of Venice, I.i, line has Gaga all over it:

In A Comedy of Errors, V.i, Lady Gaga describes her liberation and her meteoric rise to success:

"gnawing with my teeth my bonds in sunder, I gain'd my freedom, and immediately Ran hither to your grace."

In Cymbeline, I.i, she even talks about the tattoo on her wrist.

And the number one reason why we think Lady Gaga is the true author of the work commonly attributed to William Shakespeare is...

In Much Ado about Nothing, II.i, she comes right out and reveals her identity:

"Troth, my lord, I have played the part of lady fame."

at 2:22 PM
Email ThisBlogThis!Share to TwitterShare to FacebookShare to Pinterest