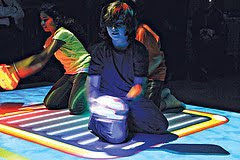 "The experimental Quest to Learn School in New York City opened last September. In the hopes of preparing students for high-tech careers, it teaches students almost entirely though video games:"

"This year’s 72-student class is split into four groups that rotate through five courses during the day: Codeworlds (math/English), Being, Space and Place (social studies/English), The Way Things Work (math/science), Sports for the Mind (game design), and Wellness (health/PE). Instead of slogging through problem sets, students learn collaboratively in group projects that require an understanding of subjects in the New York State curriculum. The school’s model draws on 30 years of research showing that people learn best when they’re in a social context that puts new knowledge to use. Kids learn more by, say, pretending to be Spartan spies gathering intel on Athens than by memorizing facts about ancient Greece."

"Most sixth-graders don’t expect to ever need to identify integers, but at Quest, it’s the key to a code-breaking game. In another class, when creatures called Troggles needed help moving heavy objects, the class made a video instructing how long a ramp they should build to minimize the force they needed to apply. “They’re picking concepts up as well as, if not better than, at other schools,” says Quest’s math and science teacher Ameer Mourad. Beyond make-believe, Quest is the first middle school to teach videogame design. Salen says building games teaches students about complex systems, which will prepare them for growing fields such as bioinformatics."

at 12:26 AM
Email ThisBlogThis!Share to TwitterShare to FacebookShare to Pinterest