I am an English Teacher; You do the Math 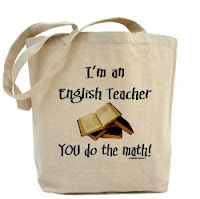 All right, I confess that that is not a Douglas Grudzina Original Quip, but it is by and large a Prestwick House Original, so as long as I’m writing for Prestwick House, I think I can legally use it.

But in reviewing this data, I got to thinking about how mathematics kind of _is_ a language (my future son-in-law is a high school mathematics and physics teacher, so he’d be happy to hear me admit that), and perhaps mathematics teachers experience some of the same frustrations—often for some of the same reasons—as other language teachers. And maybe the solution is the same as well.

Here’s the backstory, the exposition, whatever you want to call it:

While reviewing this data, I encountered a young woman (fourth grade). She was tested once in the fall of 2010 and once in the winter of 2011. She was probably also tested in the spring of 2011, but I don’t have that data. Her scores in three categories were reported: _Numeric Reasoning_, _Algebraic Reasoning_, and _Geometric Reasoning_.

But that’s not the point.

Now here’s the point…(and thank you for your kind indulgence).

You give me any equation, tell me to solve for X, and I’m on it!

But…so what? When I order floor tile or paint, unless I’ve had someone else come in a measure for me, I invariably order too much (excess not refundable) or too little (sorry, that was the end of the lot run, so your next order will not match).

OKAY, now here’s (_really_) my point … (And _really_, thank you for your extreme patience.)

The English language has all sorts of tools—like algebraic equations—all of which _help us_ formulate thoughts, communicate those thoughts to others, and understand the thoughts that others have communicated to us. I’m thinking things like verb tenses, pronoun-antecedent agreement, subordinate clauses.

These tools, however, are pretty pointless on their own.

Imagine practicing “hammer.” Next week we’ll get to “nails.”

But why do I care about X unless I need to know how many cubic yards of non-refundable decorative gravel I need to order for my driveway?

_Because he kindly stopped for me, I could not stop for death._

But what I remember about diagramming sentences was being tested on whether or not the line was straight or diagonal, whether it went all the way through the horizontal line or not, whether it was solid or dashed. On these tests, we would lose points if we did not put a word in parentheses that was supposed to be in parentheses.

We were tested on our knowledge of sentence-diagramming techniques.

But I do not remember _ever_ having a teacher (or professor or editor) sit down with me and diagram one of my own sentences to diagnose structural problems. That _is_ the proper use of the tool, isn’t it?

I can’t help but think that that poor little fourth-grade girl, who is _so close_ to meeting her fourth-grade standard in mathematics might do so much better in “algebraic reasoning” if someone would help her to realize that “algebra” is nothing more than realizing what piece of information she doesn’t have and finding a way to figure it out.

You know length and width; solve for area.

You know area and desired depth of stones in your driveway; solve for volume or number of cubic yards you need to order.

And I am even more certain that our most reluctant writers and readers might do so much better in the “grammar and mechanics” aspects of their language use if those aspects were made the _means to the end_ and not the ends in itself.

Is it any wonder so many of our kids zone out before they ever get to the payoff of actual communication?

at 6:53 AM
Email ThisBlogThis!Share to TwitterShare to FacebookShare to Pinterest

I am a high school English teacher (in Delaware btw) and one of my favorite teacher blogs is math teacher Dan Meyers'. I learn math every day with his "what would you do with this" feature. Creative thinkers in every discipline: http://blog.mrmeyer.com/