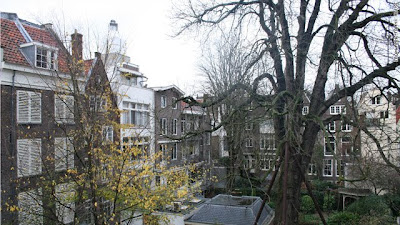 Photo courtesy of CNN.com
According to CNN.com:

A chestnut tree beloved by Holocaust victim Anne Frank as she wrote her diary in hiding in the Netherlands fell down Monday, the Anne Frank House museum told CNN. The tree, which was more than 150 years old, had been diseased since 2005 and had a support structure to help keep it upright.

But it fell early Monday afternoon, Anne Frank House representative Maatje Mostart said. "It's a pity. It's an important tree," she said. "Anne Frank looked down on it from her hiding place. It was the only piece of nature she could see." "Something went wrong with the support," she added. "Happily it fell the right way. It didn't fall on the secret annex or on a person, so that was a relief for us."

Frank, a teenage girl whose diary of her time in hiding during World War II was published after she died in the Holocaust, mentions the tree three times in her writings. "Our chestnut tree is in full bloom. It's covered with leaves and is even more beautiful than last year," she wrote in May 1944, shortly before she and her family were discovered and deported to concentration camps.

Since the tree was found to be diseased, hundreds of saplings grown from its chestnuts have been donated to schools and parks around the world, the Anne Frank Museum said.

Frank admired the tree from the attic window of the secret annex where her family hid for two years, before being betrayed. "From my favorite spot on the floor I look up at the blue sky and the bare chestnut tree, on whose branches little raindrops shine, appearing like silver, and at the seagulls and other birds as they glide on the wind," she wrote on February 23, 1944. "As long as this exists, and it certainly always will, I know that then there will always be comfort for every sorrow, whatever the circumstances may be."

The spring before her family and the others hiding with them were captured, the girl focused on the tree's budding life - and her own.
"Our chestnut tree is already quite greenish and you can even see little blooms here and there," she wrote on April 18, 1944. Two days earlier, she'd recorded her first kiss.

Frank died of typhus in Bergen-Belsen just weeks before the Nazi concentration camp was liberated in 1945. But her name, story and message live on through her diary and, also, through her ailing tree. A fungus had left two-thirds of it hollow, said Anne Frank House spokeswoman Annemarie Bekker. A battle began in late 2007 between city officials who wanted to chop it down and activists who insisted it should stay.

Read the entire story here.
at 1:36 PM
Email ThisBlogThis!Share to TwitterShare to FacebookShare to Pinterest